Mandy Moore is calling out an entertainment publication for its insistence on rehashing a very painful period of her life.

On Tuesday, the “This Is Us” star took to Instagram Story, where she shared what appears to be a message from that outlet to her publicist.

The message details how the comprehensive piece would have focused on Moore’s “entire life and career,” which would involve discussions of a name that’s been whited out, presumably her ex-husband (who will remain unnamed in respect to Moore).

“I hesitated sharing this when I receive yesterday for plenty of reasons but I woke up thinking about it and my blood is still boiling,” she shared.

“When they were told that I had spoken plenty about a certain subject in my life and would have no further comment (truly there are countless interviews they could pull from, that story is over and there’s nothing more to say.), this was the response we got back,” she continued.

“Any comment I make about said experience becomes clickbait and gives them the energy and time they seek and have already stolen from too many for too long,” Moore continued.

She pointed out she’s been in show business for more than two decades, “but the message this sends is insulting and so out of touch with the cultural discussion around abusive relationships, directly linking someone’s value back to their abuser.”

She concluded by stating, “The refusal to interview someone unless they agree to relieve that trauma publicly? No thank you.: 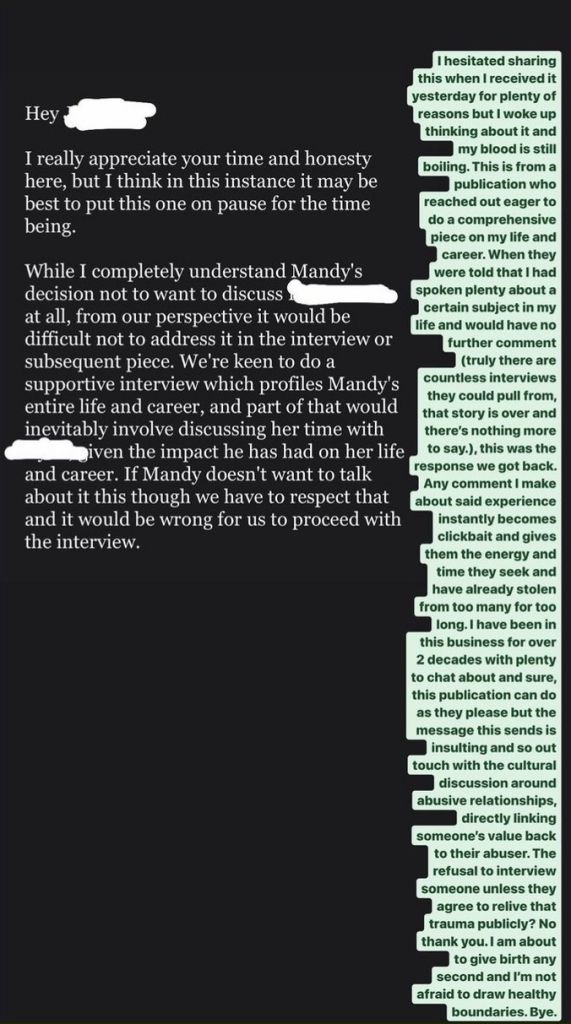 Celebs Mandy Moore This Is Us