Rudolph carried on the tradition by penning a motivational message for Daniel Kaluuya.

“Go get ’em, Daniel!” she wrote on a post-it stuck to the dressing-room mirror.

“Have fun, breathe, and kick some ass! Love, Maya Rudolph.”

Kaluuya made his “SNL” hosting debut the week after Rudolph’s appearance.

Levy was praised for starting the note-writing tradition during his turn hosting “SNL” on Feb.5.

However, the “Schitt’s Creek” star recently said that isn’t completely the case.

“I feel the need to clarify this… I didn’t start (the tradition),” he told Today. “I kind of continued it.”

Levy said that the year before Woody Harrelson had left a note for Phoebe Waller-Bridge.

“So I asked if I could leave a note for Regina because the process is such a strange experience,” he said. “Strange, wonderful and intimidating experience that like, a little note from the person that had just done it felt like such a sweet vote of confidence.”

After making his “Saturday Night Live” hosting debut, the actor left a note for Regina King, host of the following week’s show, written on a Post-It he affixed to the mirror in the host’s dressing room.

“Regina! You got this! Much love, Dan,” he wrote. King then shared a photo of Levy’s note on Instagram Stories, sending Levy a shoutout for his kind words.

“Awww. You’re the best @danlevy,” she wrote in a selfie she shared. “You crushed it!”

The following week, “Bridgerton” star Regé-Jean Page made his hosting debut, and found a similar Post-It on the mirror, written by King. 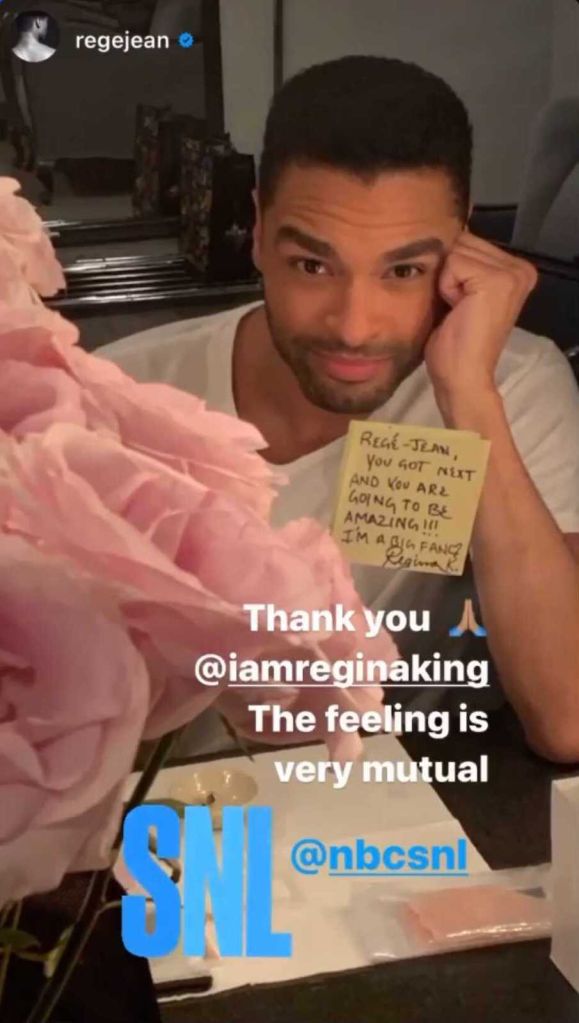 Page continued the tradition. Nick Jonas, host of the Feb. 28 episode, took to Twitter to share the note that the erstwhile Duke of Hastings left for him.

“Just have the BEST time Nick!” wrote Page to the Jonas Brothers singer.

That’s the plan! Thanks for the note @regejean 💪🏼 @nbcsnl pic.twitter.com/la4XE2kkbn