Kaley Cuoco will have her number one fan by her side during Sunday’s virtual Golden Globes. The 35-year-old “Flight Attendant” star took to her Instagram Stories on Saturday to share the sweet moment when her husband, Karl Cook, surprised her at their home.

“Most of you know that Karl is away at WEF, a big equestrian event circuit, for many, many, many weeks and was not going to be able to come back for the Globes tomorrow,” a visibly emotional Cuoco shared. “We had talked about it and it was OK because it’s virtual and I didn’t want to make him come back for that.”

However, Cook found a way to make it back home, much to his wife’s delight. Cuoco sobbed as she said, “Well, I just answered the door and…”

“I just showed up. I was in the area,” the equestrian quipped. 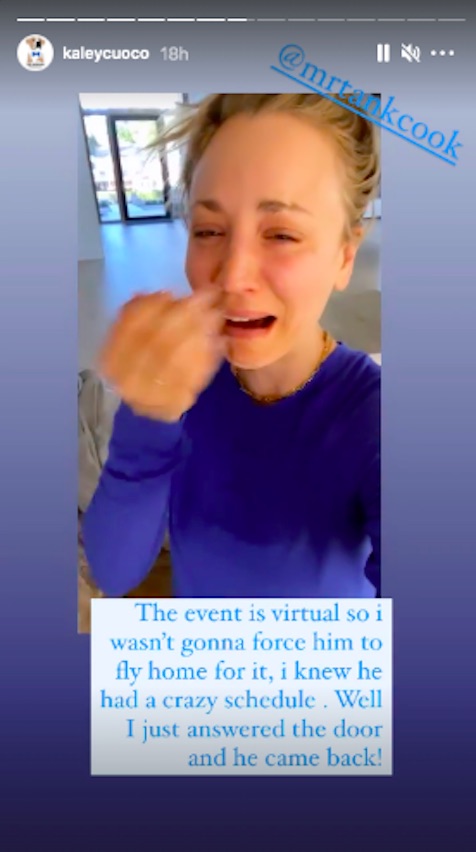 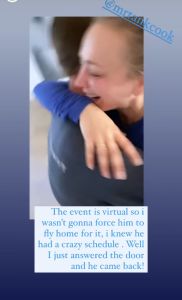 Cuoco is nominated for her role in “The Flight Attendant”, marking her first ever Golden Globe nomination.

When she learned the news earlier this month, she shared a sweet video of herself bursting into tears.

Ahead of the series’ premiere, Cuoco opened up to ET about shedding her “Big Bang Theory” persona to play a woman who is, for all intents and purposes, a hot mess.

“I loved everything about her,” she said. “Obviously, this girl struggles and she’s got a lot of emotional turmoil, and as we find out in the eight episodes, a lot goes back to her childhood, which is something she’s been running from her entire life. And alcohol is what makes her escape from what has truly happened to her. The trauma of waking up [after] this murder, it’s just adding on and bringing her back to her childhood.”

Cuoco will be up against “Emily in Paris” star Lily Collins, Elle Fanning for “The Great”, “Schitt’s Creek” star Catherine O’Hara (who won the Emmy last year) and Jane Levy of “Zoey’s Extraordinary Playlist”.

Earlier this weekend she met up with O’Hara and shared a cute pic of the “Schitt’s Creek” star.

“Anyone who knows me knows what this moment meant to me. I finally met my comedy queen #catherineohara and she’s everything I hoped and dreamed 💖” she captioned the photo.