Jamie Lee Curtis On Cleavage Baring Yellow Dress At Golden Globes: ‘They Are Back In The Stable… For Another 5 Years’

While taking part in a Make March Matter kick-off event on Monday, Jamie Lee Curtis revealed she’s supporting the cause to benefit Children’s Hospital Los Angeles while feeding her cravings. After opting for a tight-fitting yellow dress at Sunday night’s Golden Globe Awards, the actress is a little “hungry”.

“Mommy’s a little hungry, because Mommy poured herself into a tight yellow dress last night,” she joked of the stunning design that had her trending on Twitter, while giving away one of her favourite lunch spots in LA. “I’m going to go to Panda and pick up my lunch, because they’re participating, they’re a big donor of Make March Matter.”

RELATED: Jodie Foster Thanks Aaron Rodgers In Golden Globes Speech, As Promised, After His Recent Shout-Out

At the awards ceremony, the actress presented the Best Supporting Actress, Motion Picture Golden Globe Award to her best friend, Jodie Foster for her role in “The Mauritanian”.  “The Golden Globe goes to my bestie… Jodie Foster,” she said as she announced her as the winner on Sunday.

After the awards show, Curtis posted a photo to Instagram of her wearing a gorgeous Alex Perry creation with the following caption: “What a thrill to salute front line workers and a talented group of actresses AND call out my friend, Jodie Foster as the WINNER for Best Supporting Actress for her work in @themauritanian @goldenglobes. It takes a village to prepare me for public consumption @seanjameshair @jostrettell @jrossgirl @alexperryofficial @cathywaterman 🌕🌕.”

Curtis’ look had Twitter on fire – see some of the reaction below.

As I lay me down to sleep, I pray I age as well as Jamie Lee Curtis. Amen.

Meanwhile, on Thursday Curtis appeared on “Today” to talk more about the #MakeMarchMatter campaign with hosts Hoda Kotb and Jenna Bush Hager, and that canary yellow dress came up again in the conversation.

When asked about her knockout appearance at the awards show in that gown, she replied: “You know, I’m 62 years old, and I’ve been wearing black leggings for a year. And so the truth of the matter is, I’m an actress, and I was privileged to be asked to present at the Golden Globes, and I decided to suit up and show up.”

She joked of the cleavage-baring cut of the dress, “You know, once in a while, everybody needs to come out, get a little sunshine. They are now well-fed. They are back in the stable. They don’t need to come out for another five years.”

And we all got a little sunshine seeing the star in that number, with the actress explaining of the colour, “There is something about wearing sunshine during this moment, when we have all been denied the freedom that sunshine and the joy of sunshine and happiness, and a little glitz and glamour.”

.@jamieleecurtis joins us to talk about how she has found confidence in herself through sobriety. She also shares how people can help to raise money for Children’s Hospital Los Angeles through her company #MyHandInYours, and the #MakeMarchMatter campaign. pic.twitter.com/L6e5V0Fc26

At Monday’s CHLA kick-off event, Curtis also opened up about the pandemic and how the community is coming together to help one another: “Look at how we’ve come together during this pandemic. Look at how neighbours have helped neighbours. I have friends making masks. I have friends adopting nurse families, taking care of their kids so those nurses can get a break for a second. That’s what California in particular did. That’s what we do, we come together as a community and help each other.”

Adding, “So what’s so great about Make March Matter is we get to go to the community and say, ‘I know you want to help. You’re not a doctor, you can’t treat these children, but you’re a restaurant and you can offer food and people can make a donation directly at the restaurant.’ Or ‘you’re a company and you come in and buy something from our company and we will donate part of our proceeds to Children’s Hospital Los Angeles.'”

She further explained, “It’s a way of bringing the community, the City of Angels, the place that I was born and raised, and raised both of my children… this is what we do. We come together as a community.”

Curtis referred to a list on makemarchmatter.org of the businesses who are supporting the cause. The goal is to raise $1 million in March, to ensure children can receive the critical, lifesaving care they need. 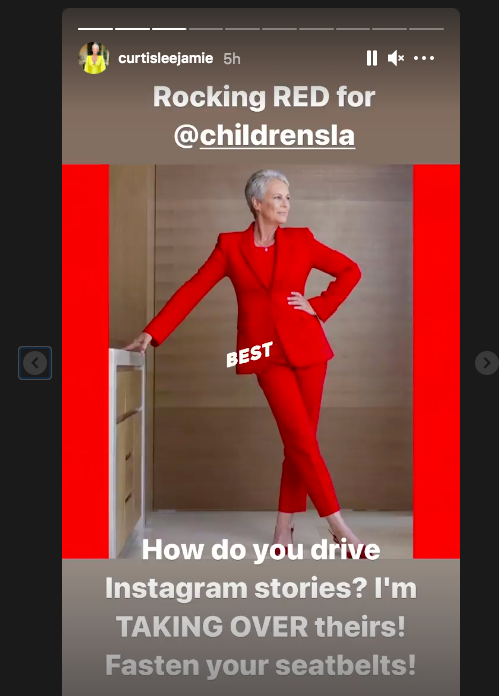 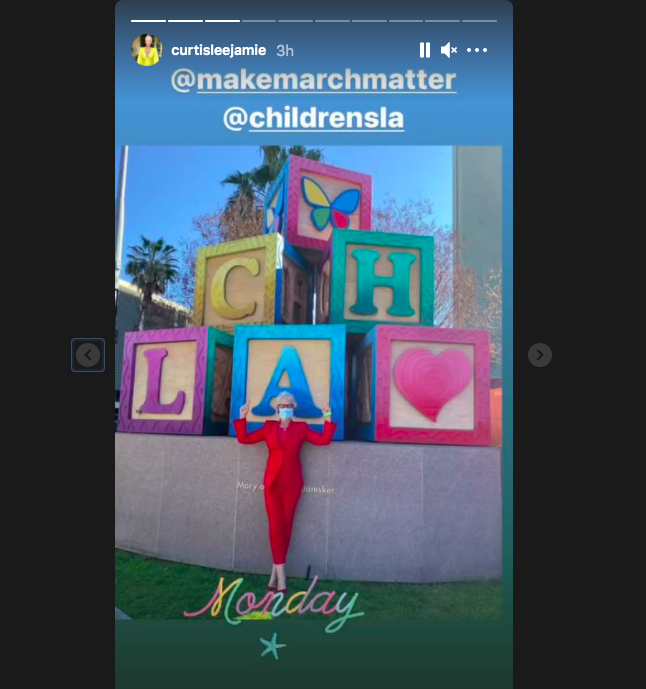 Other celebrities who’ve been passionate about raising funds for CHLA include Canada’s own Sarah Chalke and Heidi Klum.

I love @ChildrensLA for all the amazing work they do, and I’m asking you to join me by participating in the #MakeMarchMatter campaign. Visit https://t.co/eGhpREnkGT to learn how to make a difference! pic.twitter.com/o7r4Sn0eQU