Halsey Reveals Her Pregnancy Was 100 Per Cent Planned

Halsey is clearing up any rumours about her pregnancy.

The “Without Me” singer took to social media to set the record straight, revealing on Instagram Stories that her pregnancy was “100% planned.”

“Why is it ok to speculate and pass judgement about fertility and conception?” the pop star asked in the post. 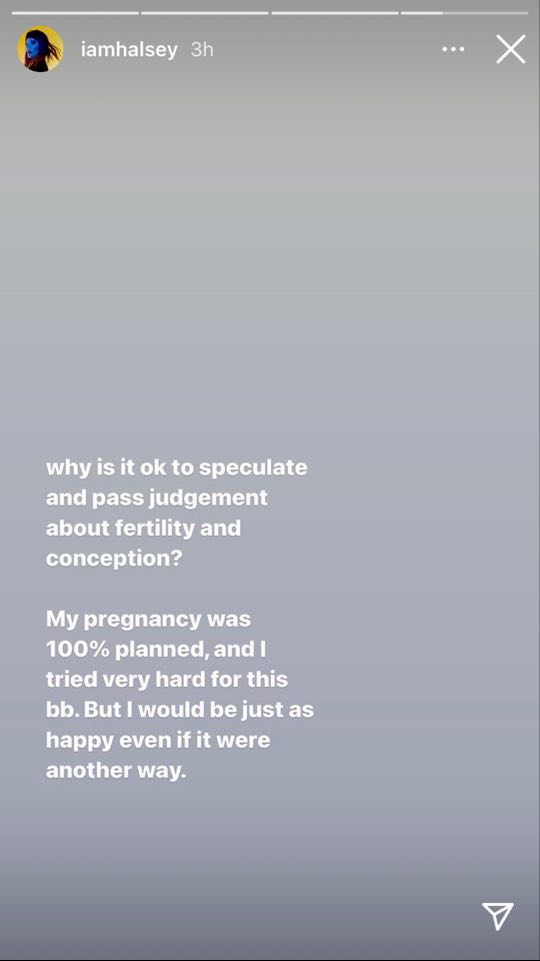 “My pregnancy was 100% planned, and I tried very hard for this bb,” she went on to say. “But I would be just as happy even it were another way.”

The 26-year-old singer revealed via Instagram in January that she’s expecting her first child with boyfriend, Alev Aydin. Halsey shared a series of three photos, showing off her growing baby bump.

“Surprise! 🍼🌈👼🏻,” Halsey captioned her pregnancy announcement post, with Aydin writing in the comments section, “Heart so full, I love you, sweetness.”

The “Bad at Love” singer has been dealing with pregnancy rumours since 2019. They first started when she tweeted, “I have The Biggest Secret (unrelated to the album) and when u guys hear it, some of you are gonna explode into actual pieces.”

“People think my last tweet is me hinting I’m pregnant, which means I’m either: a. gaining weight b. acting weirder than usual,” she clarified hours later. “Jokes on u, I’m doing BOTH! however STILL not pregnant!”

“Still not pregnant. Still just allergic to gluten. Still love pancakes,” she tweeted at the time. “Is it a boy? Is it a girl? It’s pancakes.”

Halsey Is Pregnant: Meet Alev Aydin, Her Boyfriend and Father of Her Child

Halsey Is Pregnant With First Child