Vanessa Kirby is opening up about how her Oscar-nominated work on the film “Pieces of a Woman” changed her.

Speaking with PORTER, Kirby discussed her work with stillbirth and neonatal death charity, Sands, as she prepped for the role of Martha — which landed her a 2021 Oscar nomination for Best Actress.

“I notice now, I’m so acutely sensitive to other people’s pain, much more than I ever have been,” Kirby said. “I can read it more; I can see it more and if I see it, I know how to stand beside it and hold space for it.”

She also was able to be present for a live birth, which had a tremendous impact on her. “It was the best afternoon of my life, I would say,” she added. “I hope I get to do it one day.”

RELATED: Vanessa Kirby Says ‘It’s Quite Mad’ That Harry And Meghan Have Watched ‘The Crown’

Given the uncertainty brought about by the coronavirus pandemic, Kirby was unclear that “Pieces of a Woman” and her other completed projects would ever see the light of day.

“Honestly, I didn’t know if the films would ever come out,” she said. “Cinemas were closed and neither of them were with Netflix or any distributor. It was five months of absolutely nothing. I wasn’t attached to any other jobs, so it wasn’t like I was preparing for anything. I was in equal parts a 13-year-old and a retiree.” 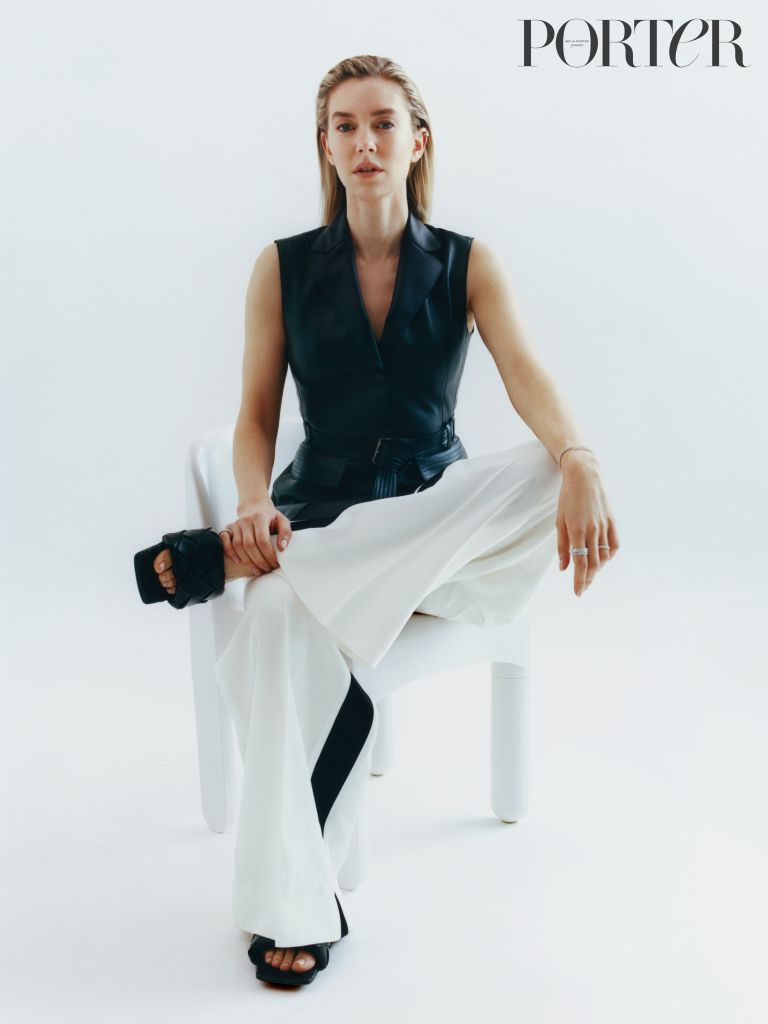 “They lived in such difficult circumstances,” said Kirby of her character, Tallie, and Abigail, played by Katherine Waterston. This, she added, was even more true “if you were a woman, and if you loved someone of the same sex… It could be fatal in those times, to take any risks outside of what you were expected to do.”

RELATED: Vanessa Kirby And Katherine Waterston Find Love On The Frontier In ‘The World To Come’

It’s clear that Kirby approaches potential roles with tenacity. “One of my first questions will always be, ‘Is this something that scares me?’” she explained. “A lot of movies have these very neatly drawn female archetypes who are a film version of women, and that’s not what I identify with.”

Championing female-focused storytelling led Kirby to form her own production company. “From my experience of being a woman in the world, I know that you have to be an agent of that change,” she said. “I know how wonderful it felt for me to have that space on a set, and now to be creating a company where I can continue to make those choices.”

Kirby, like many other actresses, is no stranger to problematic female representation on screen. “Claire [Foy, her co-star in “The Crown”] asked me, ‘Do you feel really empowered on this?’ and I was like, ‘Yeah, I actually feel like I have space to do the work I’ve always wanted to’”, she told PORTER. “[Foy] said the same, and we realized that [it was because] we were the protagonists of our own story. It was that [moment] which illuminated the number of times when you were in [projects] where you were saying things that only helped the psychological journey and the narrative of the male characters.”

To read PORTER on iPhone, iPad and Android, visit net-a-porter.com/porter or download the NET-A-PORTER app from the App Store and Google Play