After a number of delays to their wedding, Kimberly Fishman and Mitch Potashner finally tied the knot. But it was a wedding they could have never dreamed of.

Due to Ontario changing the restrictions at weddings, the couple quickly came up with a new plan to get married at the “Schitt’s Creek” landmark, the Rosebud Motel. Most guests watched virtually, some from their cars and 10 family members had chairs set up in the parking lot.

Changing the name of the motel to the Fishpot Motel, a combination of their last names, a plan was set thanks to the creativity of the two families and help from Fab Fête Event Planning.

“We have been trying to get married for quite some time, almost a year from our original wedding date, and throughout this whole time think of something that was safe, but still unique and fun,” Fishman told ET Canada. “Definitely a dream come true. A dream we didn’t know we had until we thought about it.”

RELATED: Annie Murphy Has Been Sending A ‘Bribe’ To Dan Levy To Write ‘Schitt’s Creek’ Movie

Both sets of parents surprised the couple on the day by dressing up as Johnny and Moria Rose, fitting as that is the newlyweds’ favourite on screen couple.

“Some of their interactions in the show are really funny, sometimes they actually remind me of Kim’s parents, and my parents too,” Potashner said. “I guess without the wigs and acting career Moria had, but the two of them are hilarious together.”

Fishman’s dad has frequently been told he does look like Eugene Levy.

“They could be brothers,” Fishman said laughing.

Fans of the show know as the series wrapped up, the much anticipated wedding between David and Patrick finally took place, but not without a few glitches–something Fishman and Potashner related to. 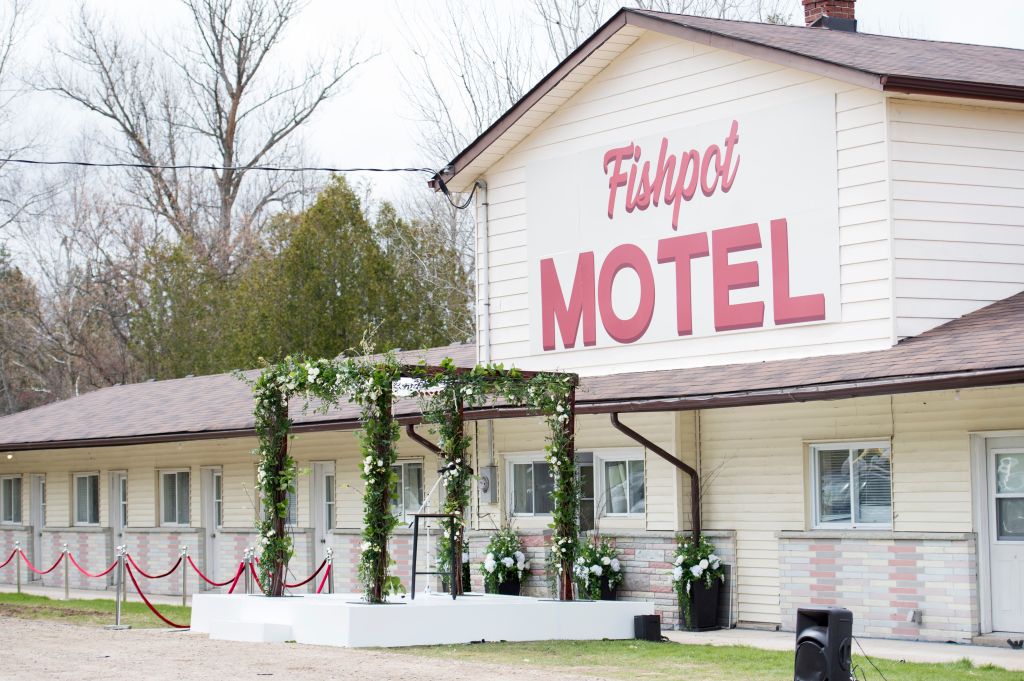 “A lot of things happen that don’t allow them to have the wedding they originally planned,” Potashner said. “It was raining a lot, they had to do a venue change which is something we had to go through. So yeah, we watched back that last episode and it felt almost surreal how close it was to our situation.”

But the wedding surprises didn’t stop there as Dan Levy recorded a video that was played for all the guests livestreaming in.

Dan Levy sent a congratulatory message to an Ontario couple who got married at the motel from Schitt's Creek – 📹 Kimberly Fishman #Ontario #Wedding #DanLevy #SchittsCreek pic.twitter.com/vpVStZh7Ak

“We had no idea. It was played as part of the ceremony, so we heard the audio from it, but all the livestream guests watched it. Of course, afterwards, we went back at watched it,” Fishman recalled.

Potashner added, “Now we get to watch it later, it is something we have saved on our phones and can show our kids one day.”

With filming no longer taking place at the motel, the owners placed it on the market last year. So could being future owners of landmark be in their future?

“Maybe we could buy it and move in,” Potashner said.

“He’s joking,” Fishman quickly cut in. “It is for sale and I hope that whoever buys it keeps it the way it is because it is such a special place and even while we were getting married, so many cars drove by and took pictures and cheered us on.”

“It was really nice to see the spirit of how many people love that spot.”