“S.W.A.T.” star David Lim talks with ET Canada’s Morgan Hoffman about the current state of Asian representation in Hollywood and the need for more diverse storytelling.

The Global show packs plenty of high stakes and high-octane action in every episode. So, it’s virtually impossible to imagine, Lim, who portrays Office Victor Tan, slowing down enough to sit behind a desk as a career. But, after earning an electrical engineering degree, that’s almost what went down.

What followed, he explains, was “a pit stop” in another profession. “I was in the mortgage industry for two or three years,” he explained. “I worked as a loan officer in San Diego. I enjoyed that. I enjoyed sales, talking to people. It was a commission-based job, so I really had to hustle if I wanted to make money. At a point, I got tired of that hustle. It wasn’t as challenging to me after a few years, and I like to be challenged. I was watching a lot of ‘Entourage’ and thinking to myself, ‘That is a cool life. That would be fun.’ I had been interested in acting and modelling. But growing up in the San Francisco Bay Area, in a pretty traditional Asian-American household, it’s not something at the top of the list of professions to pursue. But I wanted to at least try.”

Lim took an acting class, fell in love with the craft and the rest is history. The 37-year-old actor cut his teeth with guest stints on “Supergirl”, “90210” and “Criminal Minds” before landing a recurring part on “Quantico”. Then, “S.W.A.T.” unexpectedly came along.

“I had just finished ‘Quantico’,” says Lim. “I was living out in New York with my girlfriend, who is now my wife. ‘S.W.A.T.’ had come along as a pilot. First of off, it’s ‘S.W.A.T.’ I remember the movie. ‘Cool. Action. Guns. This sounds sexy.’ Then you saw who was attached to it, which was Shemar Moore playing Hondo. There was creator Shawn Ryan from ‘The Shield,’ and CBS, which has a history of shows with long runs. And showrunner Justin Lin from ‘Fast and the Furious’ and ‘Star Trek’ and so many big movies. You had to be a part of this.”

Continues Lim: “After a few auditions, they liked what I was doing. It was the day after I moved back to Los Angeles. I went in to do a final read for Shawn, Justin and the rest of the producers. My manager had called me two hours after the audition and said, ‘It’s not going to happen on ‘S.W.AT.’ You were a nice thought, but you weren’t really right for that part.’ A week later, I got a call. They wanted to book me for ‘S.W.AT.,’ for the role of Tan. I remember thinking to myself, ‘I don’t remember this character. There was no Tan in the pilot. I read that thing three times.’ It turned out that they created a role on the team for me.”

Inspired by the classic ‘70s police drama, “S.W.A.T.” follows a specialized unit of crimefighters based in Los Angeles. On the team, the big-hearted and loyal Tan has proven to be an invaluable asset. Lim, furthermore, notes it was important for him and the writers to “break down Asian stereotypes” when fleshing out his character.

“That’s why I was so drawn to this role, and that’s why I love playing this character, is that he breaks down all sorts of barriers,” Lim says. “Tan is an action hero. He’s a romantic lead. He can save the day. He’s a three-dimensional character. He has conflicts. He has personal problems. His relationship with his family is strained. It’s a great, full-fledged character.” 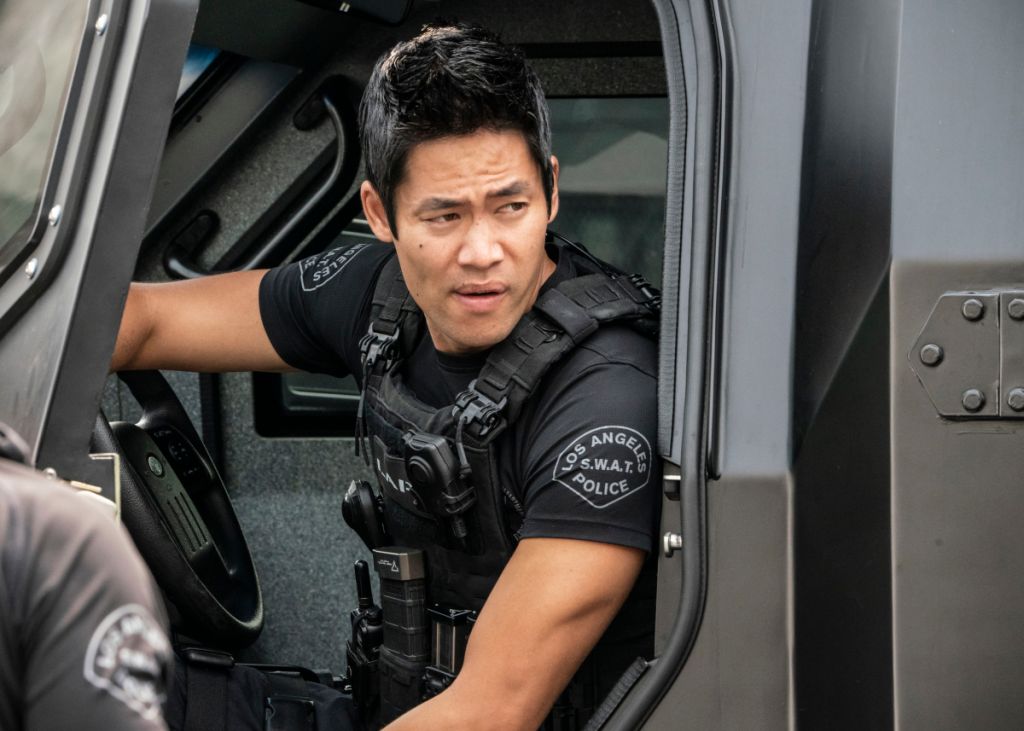 As Lim points out, representation is key. “As I was growing up and saw an Asian guy on TV, it wasn’t this,” he says. “It was a couple of lines and very stereotypical. It was very discouraging. To be able to put something on the screen that maybe a young me, somewhere out there, will be able to look up to or be inspired by or just have a positive role model that looks like him, that’s everything to me.”

From day one, when the “S.W.A.T.” pilot tackled Black Lives Matter, the show has never shied away from current events and social issues. Case in point: a season-four episode in which Tan’s mother was assaulted, simply because she was Asian. The attack sadly reflects the recent surge in anti-Asian violence in the real world, a topic that obviously hits “very close to home” for Lim.

“I was reading a lot of articles on the subject,” Lim says. “It wasn’t as heavily publicized in the media as it is right now. It was happening, these anti-Asian attacks. It made me sick because I think we are a very hard-working community. We don’t spread hate. We spread love and positivity and we have deep family values. Of course, I immediately started thinking of my parents, who are old and can’t defend themselves. I’d be heartbroken if they were ever the victims of an attack like that.”

Racism fits prominently into the series’ latest arc. But numerous episodes have allowed the show’s writers to dig deep into the characters, too. Not every episode can be Tan-centric, but this week’s episode, “Local Heroes”, allows him to shine a little bit more.

“You are going to see Tan doing his thing,” Lim teases. “We are talking chases through the streets. He starts his morning surfing. There’s a bank robbery happening a couple of blocks away. Boom. He’s off to the races. It’s a great episode centred around my character. We will see all these stories wrapped up as we near the finale. One of them is obviously Tan’s relationship with Bonnie. He’s been talking about this marriage being postponed all season. We will get that story wrapped a little bit.”

So far, story details about this year’s finale remain scarce. Lim, however, posted a picture of the cast and crew filming on location in Los Angeles. The scene promises to feature enough car chases and motorcycle stunts to satisfy even the most hardcore adrenaline junkies.

“You move here as an actor, with big hopes and dreams of making it, of being on a show,” says Lim. “Now, here you are, on the streets of downtown L.A., shutting down huge blocks to film movie-like action sequences. You really have to pinch yourself. We did that on the pilot and now here we are four seasons later, doing the exact same thing, on the exact same street. That was cool and very full-circle.”

RELATED: ‘NCIS’, ‘S.W.A.T.’ And Other TV Shows Halt Production Due To California Wildfires

It appears “S.W.A.T.” isn’t going anywhere anytime soon. The network renewed the procedural for a fifth season, and Lim couldn’t be more excited about the news.

“This season was challenging, unlike any other season just because of COVID and the protocols we had to adhere to, which were some of the strictest in the industry,” Lim says. “It was why we were able to continue without being shut down like a lot of other shows. We were able to put out some of our best episodes of the entire series.”

He adds: “It feels like a really nice payoff. We were rewarded with not only a great season, but a fifth season.”