The birth certificate for Prince Harry and Meghan Markle’s daughter, Lilibet Diana Mountbatten-Windsor, published on Thursday, refers to Harry as ‘His Royal Highness’ even though he agreed to stop using the style after he stepped down as a senior working royal in 2020. However, royal watchers shouldn’t read too much into this revelation.

A copy of the certificate provided by Santa Barbara County confirms, as previously revealed by the Duke and Duchess, that little Lilibet was born on June 4 at Santa Barbara Cottage Hospital. TMZ was first to publish the certificate, noting that in the section of the certificate for the parents’ names, Harry’s first name is listed as “The Duke of Sussex” and his last name as, “His Royal Highness.” Wife Meghan’s full name, however, does not include any of her royal stylings. She is recorded as “Rachel Meghan Markle” (Meghan is technically the Duchess’ middle name). 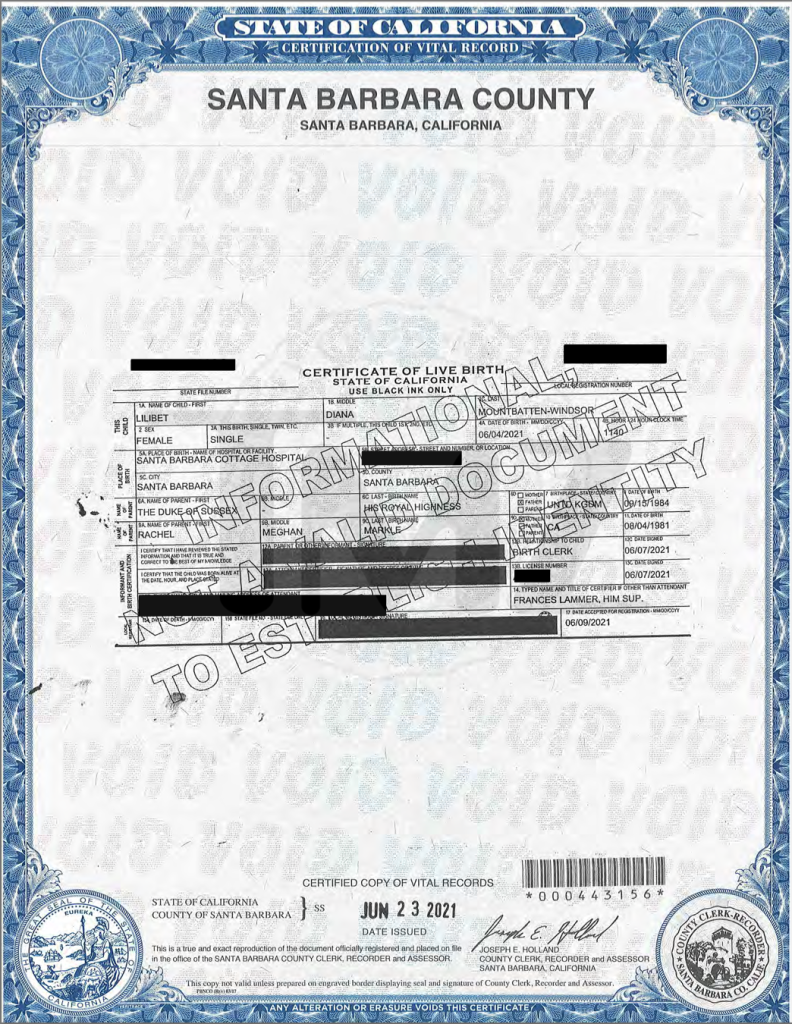 Though Harry and Meghan have retained the style of “His/Her Royal Highness” or “HRH” after they left their roles as working members of the royal family, they did agree to no longer use those stylings and instead use only the titles of Duke and Duchess of Sussex.

RELATED: New Report Goes Into Detail About How Prince Harry And Meghan Markle Paid Over $4 Million For Frogmore Cottage Rent And Renovations

However, the presence of “HRH” on baby Lili’s birth certificate does not mean the couple plan to use the style in their public dealings going forward. And in fact, the title was included on the baby’s birth certificate because it is Harry’s legal name.

A spokesperson for the Sussexes clarified to ET Canada that what is listed is Harry’s legal name. As for why Meghan is listed without any of her royal titles, the spokesperson explained that “Rachel Meghan Markle” is “her maiden name – the document required her maiden name.”