Megan Fox made some controversial comments during a recent talk show appearance that, depending on what side of the political divide one happens to be on, have made her either a hero or villain.

On Tuesday, Fox appeared on “Jimmy Kimmel Live!”, speaking with guest host Arsenio Hall and discussing her experience at the previous weekend’s UFC 264.

During the fight, ex-president Donald Trump made an appearance, and happened to sit in the same section as she was in.

“I was in a row with Bieber, Trump was also in my row,” she described.

“And I’ve never seen a Secret Service person before,” she added. “So, he [Trump] had like 30 Secret Service with him. He was a legend. That arena was, like, very supportive of Trump when he came in,” she said.

“I was like, ‘I don’t know how I feel about this, because if someone is a target, then I’m like, I could get harmed because I am like adjacent to where he is.’ So, I was worried about my own safety, that’s all I was caring about,” added Fox (her remarks begin right after the four-minute mark).

Fox wound up being praised by right-wing media for her apparent praise of the former “Celebrity Apprentice” host by referring to him as a legend; meanwhile, she was also pilloried by those on the other side of the political divide, for the same reason.

On Wednesday, Fox took to social media to clarify that she isn’t supporting any political party, and that her remarks had been completely misunderstood.

“Uhmmm… I do not align myself with any political party or individual politicians,” she wrote in a post she shared on Instagram Story.

RELATED: Megan Fox Would Love To Do A Sequel To ‘Jennifer’s Body’

“I never said Donald Trump is a legend,” she continued. “I said he was a legend… in that arena (key part of that sentence).”

As she explained, many of the UFC fans were “clearly Republican based off the insane crowd reaction he received,” she wrote. “That was an observable fact, not my opinion.”

She concluded by sarcastically adding, “Really loving this uneducated, mid-evil [sic], pitch fork carrying, burn a witch at the stake mentality though. The world needs more of that.” 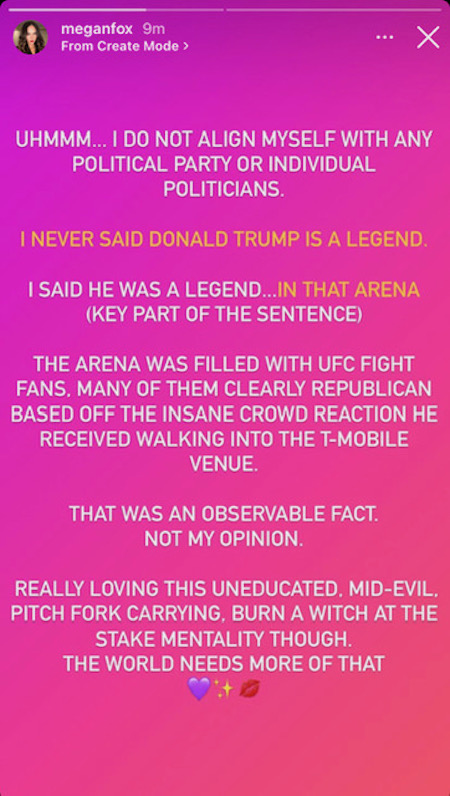 Fox then served up a SpongeBob meme to close the door on the discussion. 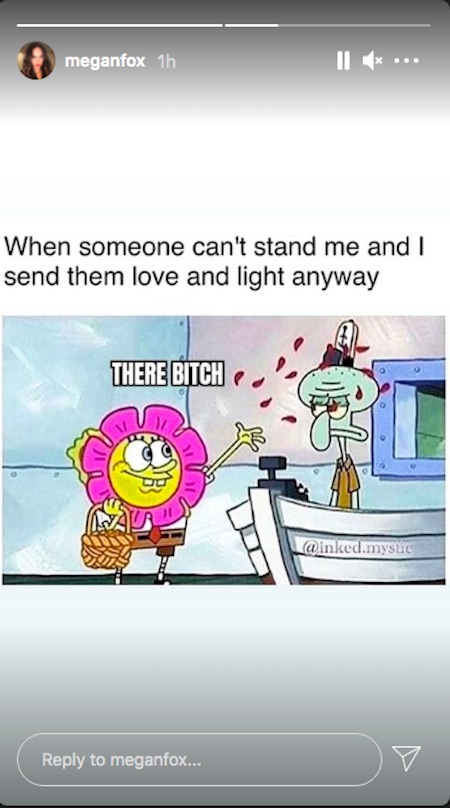