Emily Ratajkowski Claps Back At Mommy-Shaming Haters: ‘Shame On You All’

Emily Ratajkowski was targeted by mommy-shaming trolls last month after sharing a photo on Instagram (since deleted) that caused her to be criticized for the manner in which she was holding her 3-month-old son.

She compared the recent attacks on her to similar ones launched in the past against Britney Spears in a new post she shared on Instagram Story.

RELATED: Emily Ratajkowski Calls Out ‘This Is 40’ For Treating Megan Fox’s Character ‘So Badly’

“We are all reflecting back on shaming Britney [Spears] and calling her a bad mom,” Ratajkowski wrote. “We talk about how we have to ‘do better’ as a culture. Meanwhile, my comments are filled with awful remarks about how I don’t deserve to be a mom. Shame on you all.”

She added: “I don’t care if you hate me or hate celebrity (or just hate women) but it’s incredibly scary to become a parent and no one deserves to be told by strangers that they’re a s**tty mother.” 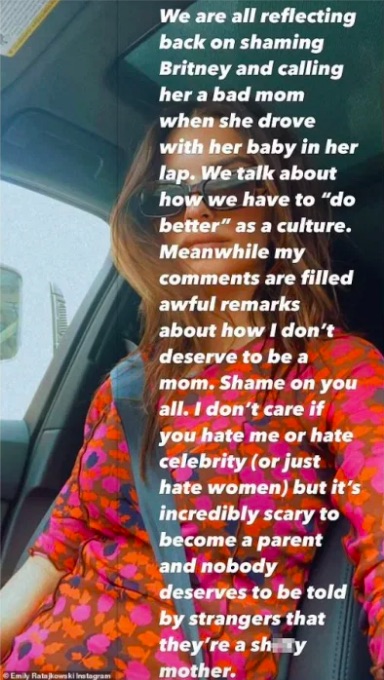