Sam Asghari is hopeful that new documentaries about his fiancé Britney Spears will depict her in a “respectful” manner. But he’s also wary.

Asghari took to his Instagram Story on Friday to weigh in on new projects being released about the conservatorship. That same day FX, Hulu and The New York Times released their latest Spears documentary, “Controlling Britney Spears”, a follow up to their previous doc, “Framing Britney Spears.”

“Apparently my opinion has increased in value over the last few days,” Asghari wrote on Instagram, seemingly referring to the fact that he and Spears are newly engaged.

“Past docs left [a] bad aftertaste. I’m hopeful this one will be respectful,” he said.

“I don’t blame CNN, BBC or NETFLIX (wich [sic] got me thru lockdowns [emoji]) for airing them because as an actor I tell other peoples [sic] stories too.”

“I question producers who made them ‘just to shed light’ without input or approval from subject,” he added. “Any credit for light being shed should go to #freebritney.” 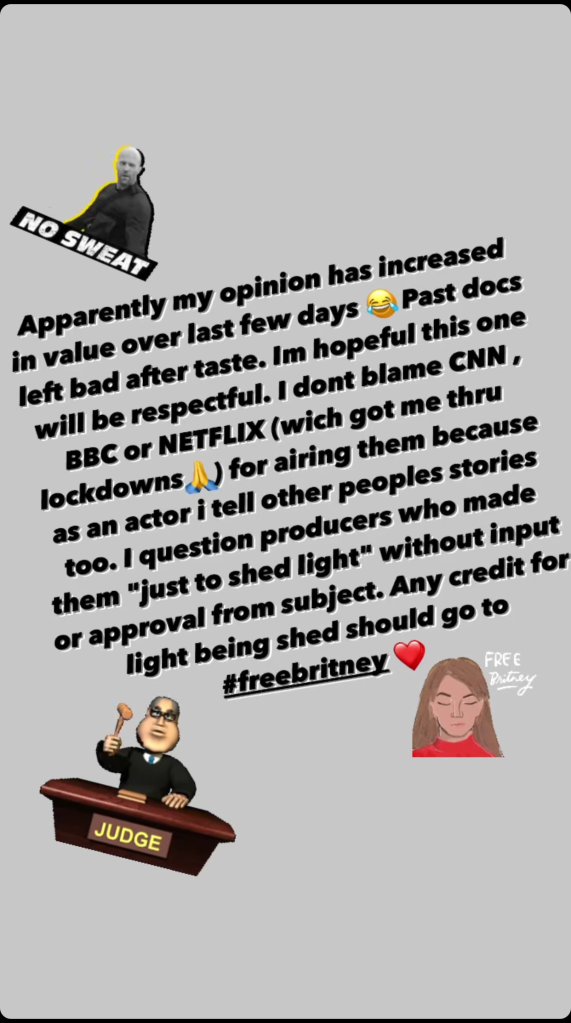 Spears herself previously said that “Framing Britney Spears” left her in tears for two days.

Asghari’s statement on his Instagram Story comes just days after he left a comment on Netflix’s Instagram post of the trailer for its new documentary, “Britney vs. Spears”, saying, “I hope the profit from these docs go towards fighting [against] injustice #freebritney.”

“Britney vs. Spears” comes out Sep. 28, the day before Britney is scheduled to be back in court to once again discuss her conservatorship.

On Wednesday, Spears officially filed paperwork requesting an expedited end to her conservatorship.

Asghari and Spears announced their engagement earlier this month.