A new trailer has been unveiled for “The Mayor of Kingstown”, a new drama for Paramount+ from “Yellowstone” creator Tyler Sheridan and Hugh Dillon (a.k.a. star of TV crime drama “Flashpoint” and frontman for Canadian rock band The Headstones).

The series is set in Kingstown, Michigan, where the McLusky family are power brokers who run the town’s only thriving industry, for-profit incarceration.

RELATED: Jeremy Renner Is The ‘Mayor Of Kingstown’ In Gritty New Series: Watch The Trailer

“Tackling themes of systemic racism, corruption and inequality, the series provides a stark look at their attempt to bring order and justice to a town that has neither,” notes the series synopsis.

In addition to the official trailer, Paramount+ also revealed key art for the upcoming series. 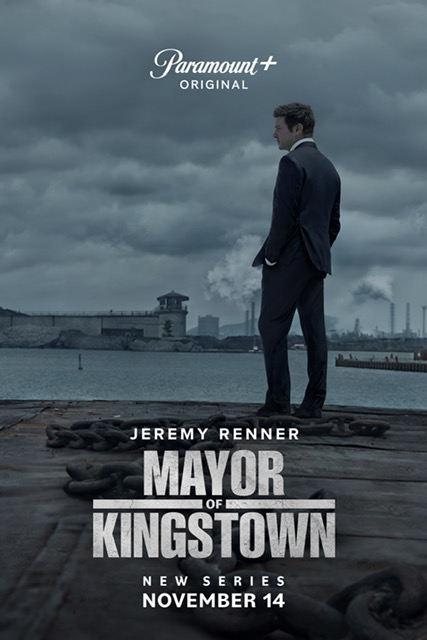 During a session for “Mayor of Kingstown” at the Television Critics Association summer press tour, Renner discussed how his character, Mike McLusky, has been influenced by his surroundings.

“We’re all a product of our environment And the environment is bleak. And how each character, or even my character, chooses to deal with that, the limitations of our environment, is very specific,” Renner explained. “It’s a beautiful world that’s set up. It’s hard for me to even, like, when I discuss my character, because I feel, like, the story and the backdrop and the surroundings are ultimate character in this that end up defining who each one of us are. And there’s something really interesting, I think, in Mike, of how he — like, I feel like all of us perceive limitations or obstacles. He’s a very actionable character that I really like.  He’s definitely a doer… I really love the strength of this family.  I love the strength of this character.  I love the strength of really all the characters. And, again, it all starts with the limited, bleak surroundings that they are surrounded in. That’s what we all share, the good guys and bad guys and the ugly of it all. We all share a similar sort of backdrop and how we are, you know — I don’t want to say ‘victims,’ but ultimately products of our environment, if that makes sense.”

“The Mayor of Kingstown” debuts on Sunday, Nov. 14.