Guy Lafleur, a Montreal Canadiens legend, is being honoured for his life and illustrious career at a national funeral, where hockey greats and family members paid homage to the generosity, ambition and passion he embodied until the day he died.

Serge Savard, Lafleur’s friend and former teammate, said that even though the hockey icon was the league’s top scorer and best player, Lafleur always put the team first.

“He was a team guy. He never felt bigger than the team,” Savard said outside the church. “He was a great, humble superstar.”

A crowd, with no shortage of Lafleur’s emblematic #10 jerseys, gathered outside the Mary Queen of the World Cathedral. They lined up along René-Lévesque Boulevard in the city’s downtown core, where the ceremony began at 11 a.m.

Fans chanted “Guy, Guy, Guy” as the procession made its way from the Bell Centre, with a line of cars flanked by police officers. Lafleur’s casket, draped in a Canadiens flag, was carefully brought up the steps for a last goodbye.

The five-time Stanley Cup winner died from lung cancer on April 22 at the age of 70.

Hockey hall of famers Yvon Cournoyer, Larry Robinson, Guy Carbonneau and Patrick Roy were among the first to pay tribute to the Habs legend.

Robinson, his former teammate, recalled Lafleur telling him to “Play every game as if it is your last one.”

“Nobody embodied that philosophy better than Guy,” Robinson said. “Not only did he play each game to the fullest, he tried to live his life to the fullest off the ice as well.” 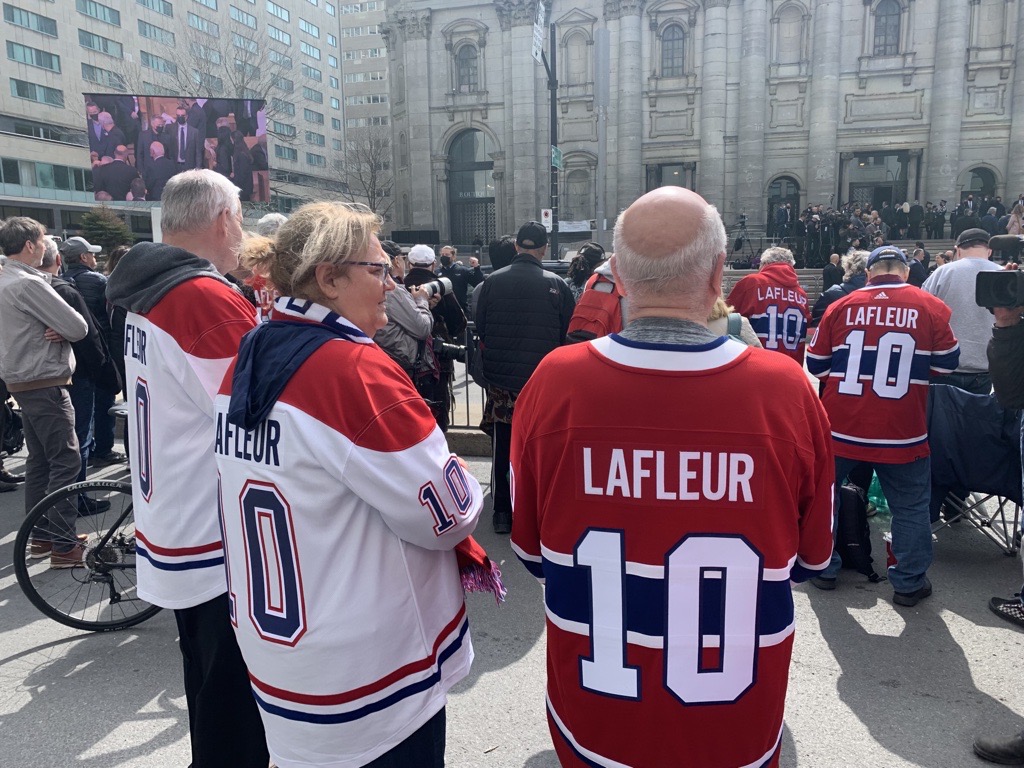 Though he was known for his skills, Canadiens owner Geoff Molson described Lafleur as someone who had “time for anyone and everyone.”

“He just spoke from his heart and his heart was passionate,” Molson said.

His son, Martin Lafleur, said his father made time for his loved ones and “even for people he didn’t know.”

He added that while his dad wasn’t perfect he did everything he could to ensure he, his mother and brother were happy and lacked nothing. “Thank you for all the values you passed on to us Dad, we love you,” he said.

Prime Minister Justin Trudeau was among those on the guest list for the service, and spoke to reporters prior to the ceremony.

“Today is a day to say thank you to Guy Lafleur for everything he gave us over so many years,” Trudeau said. “All the wins, all the inspiration, the incredible games he played but also his deep humanity.”

The NHL Hall of Famer and fan favourite was a native of Thurso, Que. Aside from playing with the Habs, Lafleur also graced the ice with the New York Rangers and Quebec Nordiques.

“We’re all proud today,” Quebec Premier François Legault said. “He was the best player and we were so proud that a guy coming from here was the best hockey player in the world.”

The final farewell comes after Lafleur, also known as “The Flower”, was lying in state at the Bell Centre on Sunday and Monday. Admirers in the thousands showed up to the team’s arena to pay their respects.

A makeshift shrine in front of the late hockey great’s statue features flowers, gloves and messages of sympathy.

The Canadiens hockey club said in a statement the Lafleur family accepted a national funeral as a way to share its grief with the community out of respect for the public who have supported Lafleur over the years.

According to the Quebec government, a national funeral is “reserved for people who, for example, have made an impact on political life, as decided by the government.”

— with files from Global News’ Tim Sargeant, Elizabeth Zogalis and The Canadian Press