Kylie Jenner is being hit with backlash over a boastful Instagram post highlighting the fact that both she and beau Travis Scott have their own private jets.

In the post, the cosmetics mogul and the rap star are seen standing on the tarmack at an airport, flanked by two jets.

READ MORE: Kylie Minogue Opens Up About Trademark Dispute With Kylie Jenner: ‘It Was Just Business’

In the caption, she writes, “you wanna take mine or yours ?” 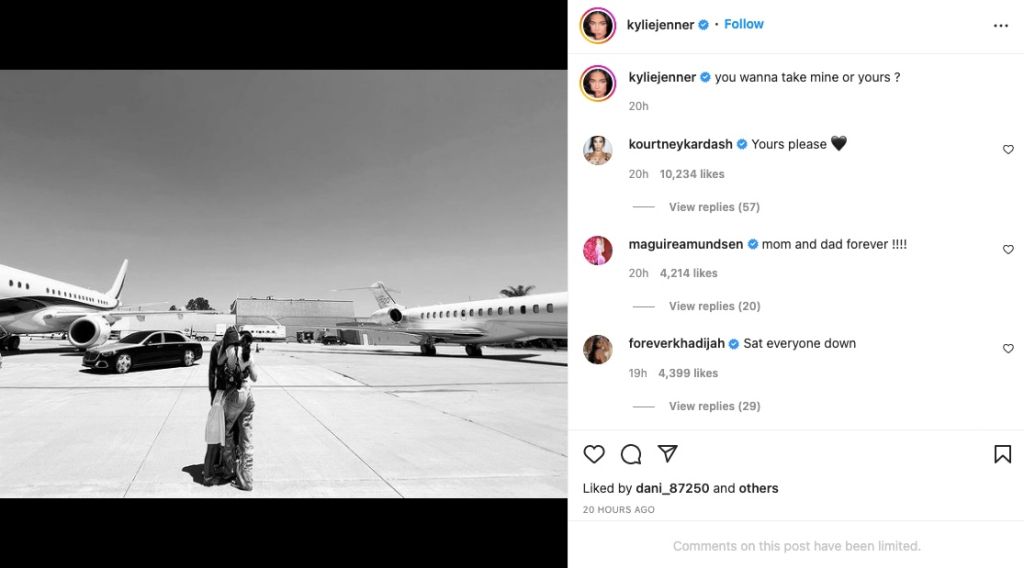 As the Daily Mail points out, Jenner’s ostentatious display of wealth didn’t exactly endear her to some of her Instagram followers, who fired back in comments.

“Too much flaunting of your wealth when others are barely surviving!” wrote one comment, while another added, “This display of wealth is unbelievable, so detached from the common persons struggles.”

Then were were those who criticized the jets’ impact on the environment. “What about combating climate change?” read one comment.

“Maybe take neither and reduce your carbon footprint?” quipped another, while a different comment read, “Why do I have to limit my meat consumption and use paper straws while the 1% gets to pump tons of carbon into the atmosphere for a day trip to Palm Springs.”

Meanwhile, the backlash was summed up with comments that read, “Classless boasting,” and, “You’re the reason the planet is being destroyed.”