Kelsea Ballerini rocked an old-school look on the red carpet at Wednesday night’s ACM Honors in Nashville — courtesy of none other than Shania Twain.

READ MORE: Shania Twain Teams Up With Kelsea Ballerini For ‘Hole In The Bottle’ Remix

According to Ballerini’s rep, she’s indeed wearing the dress and not a copy.

“Kelsea reached out, and Shania was more than happy to lend her the dress and thought it [was] really fun,” the rep told People.

Prior to hitting the red carpet, Ballerini took to social media to share a brief tease.

“Sisterhood of the traveling dress…guess where @shaniatwain’s #GRAMMYs dress is off too next,” she wrote in the caption of a post on Instagram Stories, including a photo of Twain wearing the dress on the red carpet. 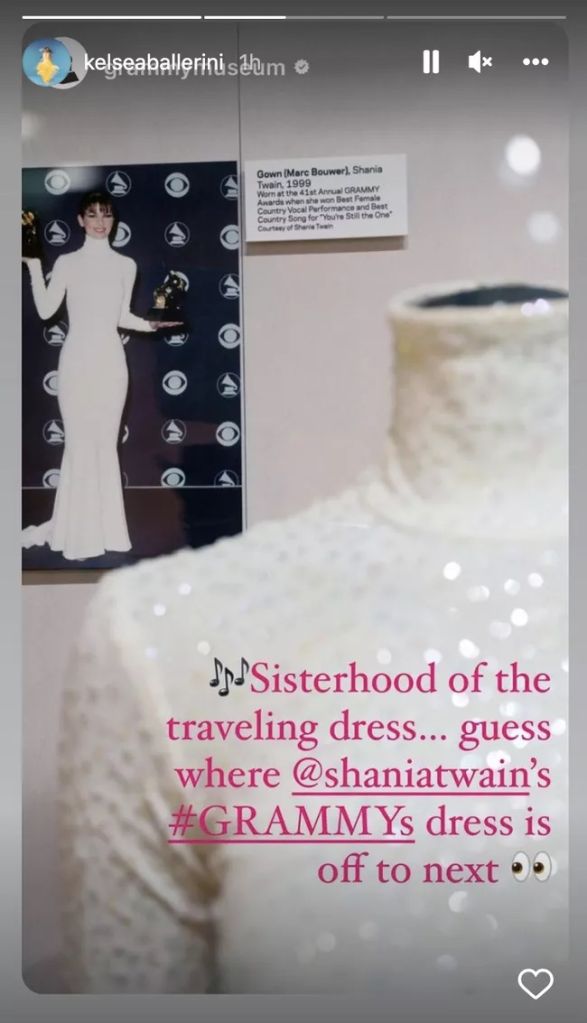 Speaking to ET, Twain said she was “so blown away” to see Ballerini in the gown. “She looks stunning. She looks like an absolute angel. It’s very flattering to see her in the dress, and that she even wanted to wear it. I said, ‘I hope it’s not too dusty after being in the [Grammy Museum].'”

As Twain explained, “It was an incredible night for me at the Grammys. That dress represented that experience, so I’m just happy to see it alive again. Now it has a new life, and it has new memories, and it’s really great to be able to share that with other people, with another women. Obviously it’s a huge compliment to be admired enough that someone would want to step into my dress.”

Back in 2020, Twain reminisced about the gown, created by designer Marc Bouwer, during an interview with Vogue.

“Grammys, that’s always a great night, right? That’s always a wonderful moment,” Twain recalled. “Very much in the Audrey Hepburn theme. This is where I really start getting, I guess, excited about being shiny and glitzy. Country music artists when I was a kid were always like, really glitzy and shiny, and I thought, ‘Well, you know, I wanna be more sober than that in my style.’ But oh no, once I got into sequins that was it. I’ve never turned back.”