Oprah Winfrey Says Sidney Poitier Would Be ‘Proud’ Of AppleTV+ Documentary: ‘This Is Us Memorializing Him, Celebrating Him, Honouring Him’

ET Canada is giving audiences an extensive look into the life and legacy of a legend in “Icons: Oprah Celebrates Sidney”, where Winfrey and director Reginald Hudlin exclusively share with ET Canada’s Cheryl Hickey the story behind the making of their new Apple TV+ documentary, “Sidney”.

Poitier was a trailblazer who smashed glass ceilings, racial barriers and became the first Black man to win an Academy award in 1963.

In 2002, he received an honourary Academy Award, and in 2009, the Presidential Medal of Freedom from Barack Obama.

However, to Winfrey, Poitier was more than his achievements.

“There’s nobody I adored, admired, respected, and loved more,” she shared. “So, when Reginald came to me and asked, you know, would I be a part as a producer? I mean, you know, many times you have to think about things. It was an immediate… it was a yes that came right up out of my soul.”

“His intelligence, his courage, his moral integrity. I can you know, I can use all ten fingers,” he continued. “My dad and Sidney Poitier is who I measured myself against. When I get the opportunity to tip my hat and give thanks to what he did for me and everyone else on this planet. Yeah, I’m in.”

“Sidney” will also honour Poitier and his legacy as an actor, filmmaker and activist at the centre of Hollywood and the Civil Rights Movement, and for Winfrey, it was important for both her and Hudlin to protect his story.

“I think of it as an offering to the world,” she said of the film. “I think you will be blessed by the watching of this film. You will be inspired. You will be comforted.”

Following Poiter’s passing at the beginning of 2022, Winfrey knew that getting this documentary right was going to be an “even more intense operation.”

“I was also very happy that I had already done my portion of the interview and that we were almost finished because it would have been a very different kind of interview talking about him in the past tense, then in the now when he was was still very much alive,” she revealed.

Although Poitier isn’t here to view the final cut of the documentary, Winfrey is confident that he would be proud of this thoughtful piece of work.

“This is us memorializing him, celebrating him, honouring him in a way that has not been done publicly. And I know, you know, he would love the film that you have now done,” said Winfrey. 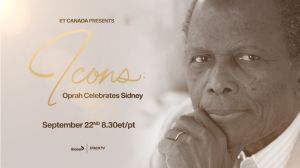