‘Bones’ Is Back! Inside Scoop On The Rest Of Season 10

‘Bones’ kicks off the second half of its season with the return of special guest star Cyndi Lauper. Star Emily Deschanel and exec producer Stephen Nathan tell fans what to expect in the remainder of the season, including Brennan becoming pregnant again, Booth sliding back into his gambling addiction — and why everyone involved wants the show to continue for years to come.

‘Bones’ returns with a new episode on Thursday, Mar. 26 on Global. You can also watch full episodes of Bones online.

Due to Emily Deschanel’s real-life pregnancy, Brennan will follow suit on ‘Bones’ — for the second time — and exec producer Stephen Nathan reveals the character’s pregnancy will have a bit more impact on the show than last time, “because Brennan now realizes what it is to have a child, having the family expand and grow and now she knows the tremendous risk that she and Booth’s job have in terms of how it affects their family. So, she’s going to have to deal with that, something that I think she was a bit oblivious to before, because she didn’t have the experience. So there are emotional considerations that surprise Brennan and will affect the pregnancy for the rest of the season… Brennan’s pregnancy will have a tremendous impact on this series, certainly giving us a season finale that is deeply affected by it.” 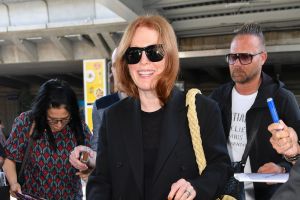