The Biggest Canadian Groups Of The ’80s

The 1980s: A decade where the Berlin Wall fell, Darth Vader gave us daddy issues and Canadian bands roamed the Earth with wild styles and rad tunes. We’ve thrown a few more wicked groups into the mix for a 10 stop look at the decade’s biggest maple flavoured combos. Put on your finest Member’s Only jacket and let’s take a gander at these ’80s radio conquering behemoths.

No need to shush us, Platinum Blonde. We have nothing but lovely things to say about you guys. Armed with style, charisma and a glammy fusion of arena rock and New Wave, this Toronto outfit were essentially an '80s A&R scout's wet dream. In a review of the band's sophomore album Alien Shores, Dan LeRoy of AllMusic offered up a spot-on description of the group. "Beyond the MTV-perfect hairdos, the quartet offered a savvy musical blend that suggested crossing Duran Duran with Def Leppard," writes LeRoy. Platinum Blonde topped the domestic singles chart in 1985 with "Crying Over You", arguably the group's biggest smash. Other memorable tunes from the band that blasted out of boomboxes and car stereos nationwide include "Contact", "Doesn't Really Matter" and "Situation Critical". Play It Again: Doesn't Really Matter

Playing With Time/CBC
START OVER 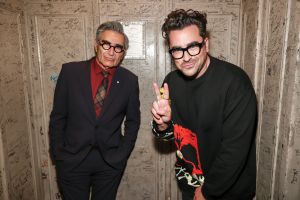